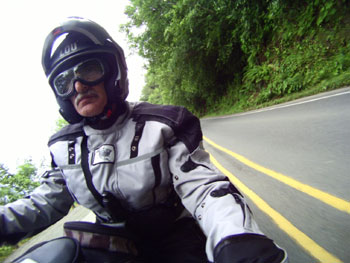 I bought the Bohn Armor Pants at the BMW shop in Los Angeles while I was working a project near there. They saw their first use in local tours along the Angeles Crest and the wonderfully twisted highways over the California coastal ranges. But it was after the project was completed and I was on my way home that I wore them through Death Valley at 115 degrees (F) one afternoon, then up over the pass to Yosemite in the icy early morning of the following day. That’s when Bohn “Under” Armor pants were permanently integrated into my touring outfit. They just plain worked.

With Bohn as the base layer, faded blue jeans or light gray hiking pants as the sun-reflective norm, and chaps or riding pants as the wet or chilly day outer layer when needed, there is not a single place I couldn’t go with confidence. And looking more like normal than like a space walk refugee at truck stops along the way was a bonus. That worked too for a low profile guy like me.

Since then I’ve worn that single pair of Bohn pants as “underarmor” for six years and 160K miles including Alaska (twice), across to the east coast (thrice), zigging the zags of Deals Gap (thrice as well), down to Key West one time, and through the canyons and deserts of the west and the Rockies numerous times. After pulling the armor pads, the pants have seen washings in motel sinks and ice-melt rivers and were (usually) completely dry by morning. Those pants looked on laundromats like a luxury.

Fortunately, the only “crash” testimony I can offer was on a primitive road deep in the Cascade range by Mt. Adams. That crash while wearing my fishing/camping boots instead of my higher motorcycle touring boots left me with new dents and cuts on my shins, but my knees, hips and thighs were protected from the roots and rocks by the Bohn system. No problem. The armor did its job.

But the bonus you don’t advertise is that my boney knees don’t take nearly the beating they once did when I stop to perform routine maintenance tasks like chain tightening and lubrication while kneeling on the unforgiving concrete of motel or Wal-Mart parking lots. Oh, yeah. That benefit alone is worth the price of admission boys and girls.

That’s functionality I’ve come to expect from my touring gear. Bohn has met, no, exceeded, those expectations.

I’m ordering another pair because after years and kilomiles of use and abuse, one of the pad pockets (hmmm, left side, hip, exactly where I fell last summer…) has begun to come apart at the seam. It still works. The pad still stays in place. But the seam is getting shorter and the open space larger with each wearing. It’s time.

From the Kenai to Key West, Madawaska to Mexicali, simple function and flexible application are the fundamental advantages of Bohn Under Armor. It serves, unobtrusively, for protection and confidence in any kind of riding. It’s been perfect for a chameleon rider like me.

The testimonial I offer on my new Bohn Under Armor is that my Bohns provide exactly the kind of multi-function utility that fits a chameleon rider quite well. Last weekend was the perfect example.

Working up to the weekend last Friday knowing that the wife and I were meeting the riding group for a dinner ride, I rode to the office with the Bohn Armor under my company uniform “Khaki” pants. But no one at work noticed the armor. We then rode to dinner with the Eat-to-Ride, Ride-to-Eat crowd, and I was better protected than others, but no one noticed that I was. Then Sunday morning’s sunrise caught me near the Idaho border, at about 100 miles into a 1000 mile riding day wearing Bohn under my traveling clothes. At the end of that 1000 mile day, I was reminded that the Bohn Armor was there only by the reassuring hug of the armor against my knees.

Of the many changes in my riding world since 1969, one of several on the up side is the improved protective gear. I still have both memories and scars that came with watching my Triumph slide into the ditch ahead of me on a sandy corner in 1970. I remember well the two days it took to get all the gravel out of my hip and elbow and get them to stop “leaking” enough so that I could go back to work. Yeah, Bohn is armor for the body, but really its protecting the paycheck that pays for all this fun stuff as much as it protects the body parts needed for the next ride. Now, 40 years after that slide, two days is worth much more to me. I don’t heal as quickly either.

I’m a rider. I wear Bohn. I think it would work for many other riders, of any riding preference.

Thanks for a great product.

**Lou is wearing All-Season Adventure pants under his jeans and an older version of our Cool-Air Shirt on top.