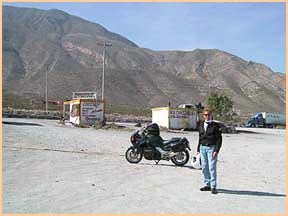 Once upon a time in Mexico there was a happy go lucky gringo on a motorcycle (Riding a K1200 RS) and a sleepy Mexican bus driver. Touring through the central Mexican mountains on a motorcycle with your buddy is one of the most rewarding things one can experience, culturally and viscerally, on a motorcycle. My amigo, Gregory, and myself were pollinating the small villages and towns with poor Spanish and small gifts for the children such as soccer balls and cheap digital watches, when we were violently reminded of one of my grandfather’s old sayings regarding safety: “It’s the bullet you don’t see that kills you, not the one you do.”

It was that faint echo in my mind just before I left Austin, Texas that persuaded me to purchase a pair of Bohn Bodyguard Adventure Pants. I was concerned about the sweltering heat through the desert before getting to the cooler mountains. I was debating just wearing jeans that I regularly pour cold water on to keep cool, or my zip and bake leathers that turn your thighs into one of those turkey legs you buy at the circus. I opted at the last minute for “Adventure Pants“, the best compromise ever created.

Cyclist, you know, the kind of morning I’m talking of: you wake up and you’re on vacation; that first cup of joe, the cool crisp mountain air, sunrise on bikes waiting patiently outside and the perfect swirling black ribbon of road disappearing into the middle of nowhere. Gregory and I had just begun our journey at about 8:30am cruising at about 30mph and apparently the only souls for miles when we added another letter to our list of “assumptions never to make in Mexico” such as; gas stations will have gas, people will know where they live when shown a map, and most recently, bus drivers are awake at the wheel.

One second I’m enjoying the view of expansive mesas, breathtaking mountains and flower farms, (periodically wondering if all this gear is necessary) the next second the world exploded. I now know what it must have been like at the very beginning of time on a motorcycle innocently riding by “The Big Bang”. Witnesses were using phrases such as, looked like Superman, shot out of a cannon and marionette in a washing machine.

Yes, you guessed it, I was struck from behind by essentially a runaway bus. The bus driver had dozed off, causing the bus to accelerate, according to witnesses, to approximately 80mph on a small two-lane blacktop hill country road and hit the motorcycle with a sonic boom. Knocked out instantly, I flew through the air striking the pavement and tumbling apparently narrowly missing being run over by the rear wheels.

The next thing I remember was waking up face down in the road, face mask destroyed, helmet cracked to the fiberglass in several locations and my friend calling my name. It was like waking up as a character in a Felini film. There was the crying old grandmother with the rosary and road map face rubbing my hand, the small child with no shirt pacing back and forth like a chicken in front of me, and this was all taking place in a foreign language with no subtitles.

The bus driver, with a full complement of passengers screaming for him to pull over, fled the scene. Farmers called the police and the chase was on. The big white bus successfully outran the police, having a larger engine and in much better condition. Fortunately, the police set up road blocks and the driver was in custody a few hours later. The journey to the hospital was approximately 60 miles and was filled with tragic stories from farmers and doctors to the police who had all experienced themselves or a loved one being struck by trucks of all shapes and sizes. In fact, my driver had a friend hit by a chicken truck with bad brakes that overturned on the same road. His friend recovered and their families had chicken for months.

I escaped with essentially severe whiplash and an alien looking impression on my lower back which confused the doctors but was actually the outline of the tailbone protector. I was wearing Levis over my Bohn Adventure Pants, and my legs were remarkably unscathed by the accident however my buddy’s knees looked as if Hannibal Lector had taken a cheese grater to them – Pizza anyone? Sorry, I couldn’t resist – jeans just don’t cut it when you are sliding down the pavement.

Amazed at the rash of accidents, I asked a few truck drivers why they thought so many wrecks were occurring. They were surprisingly open. Schedules that make it impossible to follow speed limits, driving around the clock, and the mechanical condition of their trucks. Complaining about any of these conditions meant instantly getting fired. A lot of these drivers are good men who live in fear of killing somebody every day. Even on my long bus ride back to Austin, Texas my Mexican bus driver was struggling to stay awake. In my opinion, it’s “The Jungle” meets the “Robber barons” in Mexico. There is obviously an epidemic problem in the Mexican trucking industry. There is no doubt in my mind that tomorrow the sun will rise in the East and another Mexican truck will run headlong out of control into whatever lies in its path. So what is the moral of this story? Wear your motorcycle gear and buy your Mexican bus driver a cappuccino.