US Army Crash Report from Korea 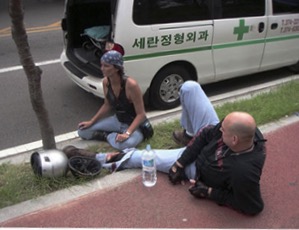 I’m stationed over in South Korea and ride as much as possible with our local club, the Yongsan Road Dragons.  I have a 1999 Harley Davidson Lowrider which I was out riding the other day…

The club was traveling south (12 bikes) to OSAN for the day.  I was the 4th bike in the far right lane when a car in the far left lane decided he missed his turn and veered all the way over to try to make his exit.  We were doing about 45 mph when he hit me.  I didn’t even see him coming.  He knocked me down an exit ramp.  Although hit extremely hard I stayed up on the bike and brought it to a stop.

The hospital checked me out, I got some stitches on my leg (for a cut down to the bone), and have torn ligaments and muscles, but no breaks (except a toe and I don’t count them)!

Here’s the strange part.  The guy had a metal bumper, which hit me directly on the knee.  Fortunately, I was wearing a full suit of your body armor under my clothes – including Cool-Air Pants.  Not one thing happened to my knee!  All the damage was where the armor stopped!  The guy’s metal bumper was torn off his vehicle – and I’m the only thing he hit!  That armor and the Big Rider Upstairs saved me some real damage!